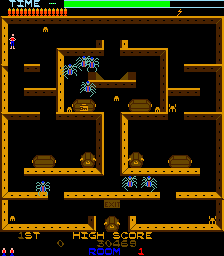 Lost Tomb takes the player into the depths of an ancient pyramid, though its location is uncertain (the box covers of the home versions place it in Egypt, but in-game it is said to be deep in the Amazon). To escape, you will need to make your way from chamber to chamber - uncovering treasures, avoiding traps, and facing a variety of enemies from scorpions and spiders to mummies and gigantic bats.

Like every self-respecting explorer and treasure-hunter, you've armed yourself with a gun and a whip: the whip clears away everything in your immediate vicinity - enemies, traps and even walls. Your gun can be infinitely reloaded, but whips are limited (though you can restock along the way). The pyramid itself dislikes your presence: if you loiter too long, or step onto a trap, the earth will shake and the walls will shoot!

Alongside the treasure chambers, each level of the pyramid has a stairway which takes you deeper down, with two different exits; fortunately, you're equipped with a map to help you plan your route. Beware the special throne rooms, rarely encountered and chock-full of traps.